The Government-Sponsored Enterprises (GSEs) entered conservatorship in September 2008. One could view the succeeding thirteen years as a journey back to financial stability with a refined operating model that looks more like a financial utility than a hedge fund. This business model is more compatible with a fair lending mission for a standard-setter that maintains secondary markets under an effective regulator. The GSEs remain the largest part of the housing finance backbone and a resilient funding source during economic stress.  While these evolved companies have been ready to be released back into the private market, they got stuck in conservatorship without capital.

The GSEs recently received permission to retain earnings, though it will take years to accumulate enough capital for independence; issuing equity will probably require congressional action but that seems unlikely. In the meantime, their regulator, the Federal Housing Finance Agency (FHFA), could take a major step by enabling the GSEs to build capital by issuing enterprise-level debt that, like Credit Risk Transfer (CRT), is subject to loss. In turn, this would shed light on the largest component of guarantee fees—the cost of capital.

Capital (claims paying ability in excess of revenues) is composed of debt as well as equity. Enterprise liabilities can be ‘high quality’ capital when they are subject to loss and have a clear payment priority that insulates taxpayers. The GSEs have transaction-based CRT debt whose cost is revealed in the capital markets, but they don’t have meaningful equity or enterprise debt to complete the picture. This leaves a large gap in capital and credit risk price setting that FHFA addresses by setting base guarantee fees and loan level price adjustments (LLPAs). Since the government provides a backstop for both the banks and the GSEs, rational pricing requires consistent capital requirements across these mortgage segments to avoid favoring one over another and distorting capital flows.

Indeed, FHFA’s recent NPR (notice of proposed rulemaking) on capital planning proposes using the Federal Reserve’s CCAR (Comprehensive Capital Analysis and Review) stress test to determine a GSE capital buffer. At least twice in the last few years FHFA has analyzed this stress test on the GSE credit portfolios. The stress test—roughly comparable to that of the financial crisis that began in 2007—resulted in pure capital needs of about 1% (combined with an implied discount rate around 12%) for today’s historically low risk credit portfolio. CRT market pricing is consistent with this result and Andrew Davidson & Co., Inc. (AD&Co) has also independently run this scenario, with similar results. We suggest a prudential buffer of at least 1% additional, while FHFA proposes a 0.75% floor for stress test capital in addition to other minimums. Employing our suggestion results in credit risk capital of roughly 2% (with a 12% discount rate), which is reasonable compared to the 4% that banks hold for whole loans that include funding and interest rate risk along with credit risk. 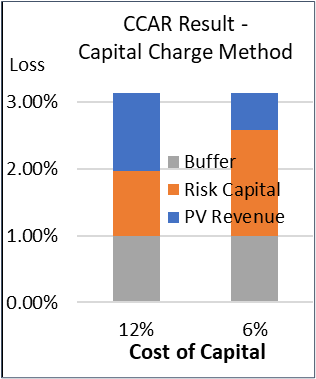 Logically, and by AD&Co’s Capital Charge method, Capital + PV Revenue should always equal PV stress losses. For example, lower capital costs and fees lead to somewhat higher capital needs. Using 6% capital funding cost (we discuss why 6% below) lowers required guarantee fees and raises risk capital from 1% to 1.6%. Since the existing credit portfolio is probably lower risk than average, we’ll round up risk capital + buffer to 3% capital in combination with the lower baseline guarantee fee. This leads to about $180B for the $6TR in GSE guarantees combined with about $30B in PV pure risk guarantee fees. The GSEs have about $50B in transaction-based CRT debt, which is probably worth at least $30B in enterprise capital. The GSEs do have about $75B in net equity ($200B preferred–$125B common), but it isn’t allocated between credit risk and other uses such as the investment portfolio, cash window, NPL (non-performing loan) portfolio, and others. Thus, we’re ignoring it for this simple example.

Suppose FHFA directed the GSEs to issue $150B in enterprise debt to protect taxpayers, that like CRT is subject to losses. Imagine a simplified credit balance sheet of CRT and enterprise liabilities, offset by cash assets, along with the off-balance sheet guarantees. Cash covers losses in excess of revenues and is shown as a share of sold portfolio. Guarantee fees are collected to service the debt. 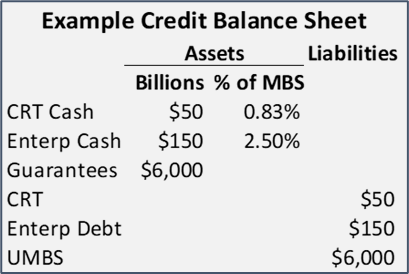 We propose a simple payment order: deal-level CRT and guarantee fee revenue absorb losses before enterprise debt, which in turn limits the risk to taxpayers embodied by the Treasury backstop. Equity could be in front or behind this debt, which could be convertible so that it can be transformed into equity in the event that the GSEs are authorized to issue it.

Capital costs are the largest component of guarantee fees, so accurately measuring them and achieving efficient market rates is critical. Actual GSE fees (net of the 10 bps unemployment tax) for 30-year loans are about 50 bps, with perhaps 12 bps for overhead and expected losses, leaving 38 bps to pay for (shadow) capital. We next compare these fees to the likely cost of GSE debt.

The $50B of CRT outstanding has a 4% current portfolio yield on bonds that are a combination of non-IG (investment grade) and low IG (perhaps 6% equity yield equivalent). Enterprise debt that is protected by CRT and fee revenue for a utility in a federally limited market is likely to be low investment grade. A ten-year average of single-A and BBB corporate yields is 3.25%, or about 100 bps above 10-year CMT yield. These two debt sources would be the entirety of GSE capital, with blended cost below 4% for the sold portfolio. This may seem low compared with equity returns, but it is the likely cost for the entirety of GSE debt capital in this proposal. Accounting for higher future interest rates and using a conservative 6% cost of funds would still lower guarantee fees in proportion to the risk.[1] Six percent funding cost probably holds while Treasury bond yields are below 5%; it’s been 20 years since 10-year CMT rates were persistently above 5%.

Costs for $180B (3%) of debt capital at 6% yield on the $6TR portfolio is 18 bps, 20 bps lower than the current estimate of 38 bps. We add a Treasury payment to compensate for the risk of taxpayer exposure, which is likely high-investment grade, 5–10 bps. Spreads on the market debt may be tighter because of the size and consistency of GSE infrastructure underlying their primary and secondary markets, both of which are regulated, along with the Federal backstop. However, that doesn’t mean the debt is subsidized, since its risk would be entirely owned by the private market and the risk of the federal backstop is paid for in fee and in exchange for complying with the housing mission.

This proposal lowers average guarantee fees about 15 bps (from 50 to 35), but the GSEs necessarily vary price with risk through LLPAs with a low baseline fee of 15 bps. The graphs below show the impact on pure risk capital (absent the buffer) and in guarantee fee equivalents from the current LLPAs to a 6% COF (cost of funds). Lowest risk loans have vanishingly small reductions while loans with FICO < 700 and LTV >= 90 would have fee reductions of 20 to 40 bps. This result is achieved by using private market capital costs and securitization, taking the guesswork out of choosing the funding cost.

FHFA could authorize the GSEs to issue unguaranteed enterprise debt to replace shadow capital and thereby reduce the uncertainty around capital costs by using actual debt costs. This could also lower guarantee fees in proportion to the risk, benefitting borrowers with lower wealth and income. Many details would have to be worked out, but this discussion lays out a way forward.

[1] A Missing Piece of the Administrative Reform Puzzle: How the GSEs Generate Cross-Subsidies